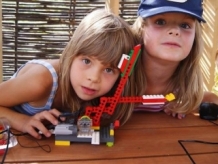 ROBOTEK – it is an adventure with robotics in a playful atmosphere – a scientific picnic, so to speak.

During the course young robotics learners build and programme robots with the help of engineers from Krakow’s University of Science and Technology. They build the robots out of LEGO MINDSTORM NXT and LEGO WE DO in order to test their creations in a practical setting after each class.
Children between 4 and 7 years old turn into little robotics engineers putting together Lego We Do sets made up of over 150 elements, which include an engine as well as a touch and motion sensor. Kids ‘put life’ into simple robots with the aid of a specialist programme installed on laptops. In this way they interact with their works of art thanks to LEGO USB Hub. In order to make the classes more attractive, we also offer additional sets of blocks which make building more advanced constructions possible.
Kids ages 8 and up work with basic Lego Education NXT Mindstorm bricks enriched with additional blocks. All in all they have over 1200 elements at their disposal – from the simplest blocks (beams, connectors, axels, wheels, etc.), complex constructions such as 3 interactive Servo Motors, sound sensor, ultrasound optical sensor, as well as light and motion sensors to the heart of the entire appliance – NXT IntelligentBrick with a 32 bit microprocessor with an LCD display and speaker. The robots are controlled with the application of Lego Mindstorms installed on computers.
Check out our webpage:  www.kraul.pl